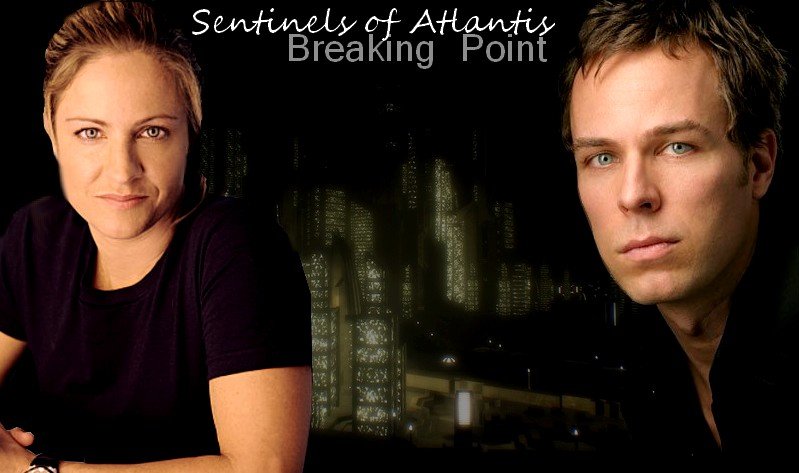 The storm hadn’t been a surprise. The Sentinels had felt it for weeks—building in the atmosphere. Atlantis had readily supplied weather data when Radek asked, it was no question how she catered to him. They’d prepared for it in every way they could. Evacuating the Athosians to the city and launching the shield using the generators from Sateda had been risky so most of the civilians and the Athosians had went through the gate to an allied planet. At least, John had considered the people an ally. The Athosians had traded with them for generations.

Cameron and Vala were in a Jumper above the planet—monitoring the progress of the storm and gathering as much data as they could on what the geeks had labeled a “super hurricane”. Lorne had taken command of everyone off world—taking all of the civilians that weren’t remotely useful with him and the majority of the Marines to protect them. This was supposed to be a fucking cake walk. It had been a cake walk until he’d heard the report of weapons fire and lost the heartbeats of three of the Marines who had been on guard duty in the gateroom.

John pulled his Guide close and turned so he was between them in whatever might be waiting them. Rodney pressed his face against the side of the soldier’s neck, and rubbed his sides gently in an effort to calm him. John didn’t know how many Genii he’d killed in the last hour but he was pretty sure McKay had an accurate count.

John took a deep breath. “Kolya is trying to force Elizabeth to release the city to his commands. He doesn’t understand why none of his people can make the consoles and computers work. Everything has shut down except for the shield. They can’t even dial the gate at this point.”

“Has he hurt her?” Rodney questioned softly.

“No, but he’s pushing her and I don’t think he’s going to be prepared for her when she responds.” John turned abruptly, his body coiling for another fight and then he shouted, “Kill them all, Elizabeth!”

Elizabeth jerked against the hold of the Genii soldier holding her—her gaze focusing on her husband as her Alpha’s words made her gut clench. They’d forced Simon to help them locate medical supplies at least until they’d realized their numbers were decreasing drastically while they were trying to loot. Fifty Genii had come through the gate and now he had eight to hold the gate. The rest had been sent to kill Sheppard and she knew they were all dead. She doubted Kolya even understood that, yet.

“Dr. Weir, I am growing impatient with you!” Kolya reached out and grabbed Simon. His hands dug into her Guide’s arm viciously and he pulled out a knife. “This is your scholar… your husband?”

Her gaze narrowed on the knife and then she focused on Simon’s face. He was angry, had a bruise blossoming on his jaw where he’d fought back when they’d first separated them. Elizabeth’s gaze darted around the room and she glared briefly at the soldier digging his gun into her side. “He is my… everything, Commander Kolya.”

“Then you will do as I ask,” Kolya moved closer to Simon and just laughed when the psychologist hissed his disgust and tried to pull away. “Else I might get it in my mind to explore why this man is so precious to you.” He ran the knife down the center of Simon’s chest, the sharp edge catching against his shirt as it went.

Elizabeth exhaled in fury and the surviving Marine in the room—started struggling against the ropes that had him tied to the banister. “Get your goddamned hands off him!” She jerked free of the soldier holding her, snatched his gun from his grasp easily, and put two rounds in his chest before anyone had time to react.

She turned and fired repeatedly—never pausing, never flinching. Bodies dropped to the floor around the room one after another until there was nothing but silence. Without stopping to look at her husband, she tossed the weapon and retrieved one of the P-90s the Genii had confiscated earlier into the seige and stalked out of the gateroom pausing only to retrieve clips from the dead Marines. Just looking at their bodies—men ripped from her tribe left her so hot with fury she thoughtly dimly that the emotion might burn through her body.

Weir counted the first ten men and women she encountered after she left the gateroom at a near run. Their hearts thumping wildly in the instant before death and then slowing to halt shortly after she left their bodies cooling on the floor behind her. Sheppard and Tyre were both coming towards her—killing ruthlessly and as efficiently as she was. All of the foreign heart beats in the city slowly snapped away—leaving a peaceful silence that she hadn’t realized she was missing until it was returned to her. Her body had started gathering sensory data on the city and the tribe long before her brain had evolved enough to process the information.

The smell of death was coy, horrific, and winding its way into her in a way that she would never be able to forget—the smell fueled her, destroyed her, ripped her humanity from her and left her a living legend—a Sentinel. Distantly she realized her husband was near by, not far from the gateroom and as always never far from her. A thousand meters south of her the last body fell, helped but the hot bite of a knife in Tyre Daos’ hand.

Elizabeth took a deep breath and let her gaze fall to the woman she’d killed. Young, blond—beautiful by the standards of anyone. Late teens, early twenties—it was hard to tell with the people of Pegasus. Death was messy, horrible, and in this instance relieving. Her territory was safe. Her Guide was safe. She turned on her heel and returned to the gateroom, her body shaking with excess adreneline, her mind racing with more sensory information than she was prepared to deal with. “I’m returning to the gateroom, Colonel.”

Simon was standing near Kolya’s body, a 9mm in one hand, slightly lowered towards the floor. “Liz?”

“The city is clear,” she whispered took a deep breath as her husband came close. “Don’t let me hurt you.”

“You won’t,” Simon whispered. “Never in a million years.”

Her gaze flicked around the room and centered on the Marine. “The Colonel says he and Tyre have neutralized the rest of the Genii forces. You’ll need to contact Major Lorne while he conducts another search just to be sure. He says that the shield is holding and we can bring everyone else back.”

Simon took the gun from his wife’s hand and set it on the console near them. “Liz.”

Her gaze focused on him, her eyes dark with fury. “He was going to hurt you. He touched you.”

“It’s okay.” Simon brought her close, taking her trembling form into his arms with a sigh. “Just relax, little one, and let me take care of you.” He swept her up easily into his arms and took a deep breath before looking at Chris Jeremy. “I have to get my wife in a secluded and safe place before she surrenders to her need to nest. Do you understand what’s happened here, Corporal?”

Jeremy nodded. “Yeah, I get it, Doc. Take care of your Sentinel and I’ll hold the gate room until I can get Major Lorne back to the city.”