It’s been a hard year (for everyone) and I’ve had this weird relationship with my writing that I’ve struggled with throughout Rough Trade events.

I feel deeply unproductive due to my messy approach to the RT events. It’s not true — I’ve written upwards of 400k this year though most of it was for the QB. I’m still very much looking forward to sharing that project with you guys. There’s a certain kind of freedom with the Quantum Bang that I’ve been exploring. I feel like both works I’ve produced for it (Unleash Your Demons & The Absence of War) are far and above my best fan fic works to date.

The fix-it theme resonates me with, of course. I mean one of the main reasons I really embraced fandom was the idea of fixing canon of the various fandoms I like to suit myself.

The one thing I’ve struggled with most this year is literally the desire to write. I am capable of it (I mean 400k speaks to that) but there have been times when the stress has been so much that I literally had no interest in writing. For someone who has been writing for 34 years, that’s a little disconcerting. I’ve never had a stress response exactly like this before.

Of course, there have been times in the past when I didn’t write–went for weeks without writing–due to illness or time constraints, or lack of inspiration but this current mindset is weird and difficult for me.

I’m in a very good place craft-wise and with my writing process. I should be the most productive I can be physically and yet I’m not.

I have a few projects to post on the site (my April RT, and last year’s QB for a start) and I’ll probably do that before the end of the year. I want to do a few tweaks to the Absence of War before I post which means updating the posts on the QB first. It’s just a few cosmetic issues so nothing plot changing or whatever.

I do have this cycle in my writing where I retreat in my WIP folder. When I was younger, I used to think I was searching for inspiration but lately, I’ve come to realize that the practice has become a reminder of my ability to create. I have over 100 works in progress because I’ve never, ever forced myself to work on a single thing.

I know writers who essentially punish themselves with a single work in progress–and they write on that one project or they write on nothing. Some are merely wired that way, but there are those who absolutely refuse to give themselves a single bit of freedom on the creativity front. Perhaps because they learned they’ll never finish anything if they do or merely because they fear that is the case. Maybe, they read some article once that told them that having more than one WIP is bad craft. I think I read that once but I immediately dismissed it as stupid.

Anyways, this year is almost over! I can’t say the stress is going to disappear in a few weeks because there are situations going on around us with long-term consequences. Still, I hope 2021 is a better year.

Also! I’d like to thank the Harry Potter Fanfiction Club Discord server for voting Harry Potter & the Soulmate Bond as the best Best Harmony story of the year! I really appreciate it and I’m sorry I missed the chat ceremony because I have the memory skills of an exhausted snidget and put the wrong date on my calendar! There is a link to the discord server below. So please feel free to check it out. It’s a very friendly and inclusive server. I felt comfortable from the very start. 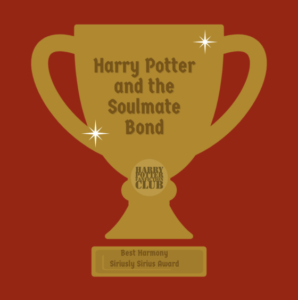 The podcast is now fully syndicated as far as I can tell. If I’m not hitting a major service/app you prefer feel free to comment here and let me know. I’ll certainly try to get my RSS feed fed into it. You can use the podcast player on my site as well without impacting my bandwidth at all so no worries on that front.