The Other Evans Girl 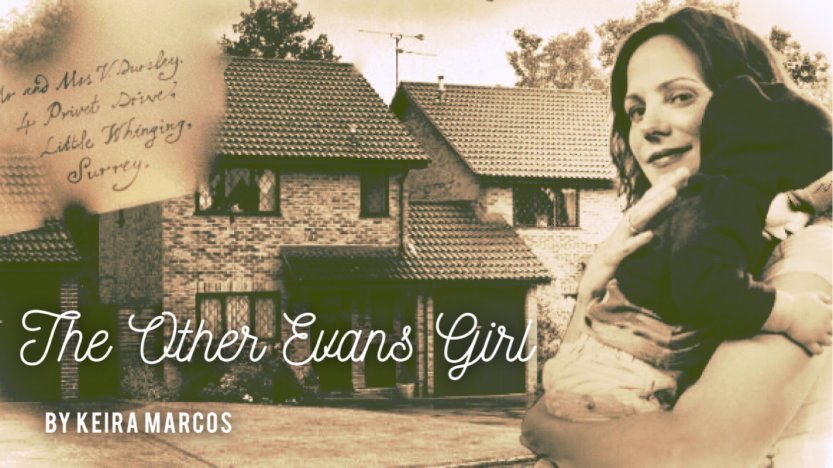 Art by by Myana Luna [aka MyzticMyanMoon]

Petunia Dursley was nervous. She watched her half-sister, Iris, prowl around the kitchen in a terrible temper. It was her fault—she should’ve realized that Iris would return from America the moment she heard of Lily’s death. Petunia glanced toward their nephew who was playing quietly with Dudley. She was ashamed to say that when her sister had arrived, Iris had found Harry in a nappy that had been soiled for a full day.

Iris was reading the letter that Dumbledore sent for the fifth time. Vernon was very quiet—which was good since Iris had already ripped him apart once for attempting to have an opinion about the situation. Iris wasn’t a witch—she was a Guide, and in their world, a Guide was nothing to be trifled with.

“I cannot believe this sorry motherfucker left Harry with the two of you when he knows you both hate and fear magic,” Iris finally muttered. “Okay, so the wards themselves are only tied to Harry and the only benefit Petunia has to them is her blood relation to Lily. Unfortunately, I can’t move the wards so Harry must stay in this house to keep Lily’s magical protections.”

“We don’t want that little freak,” Vernon protested and shifted away from Iris when she glared at him. “I mean it—I won’t have that freak in my house.”

“This isn’t your house, Vernon,” Iris said coolly. “It belonged to our parents which means I own half of it and Petunia owns the other now that Lily is gone. Lily and I agreed to let Pet use the house since neither one of us particularly wanted to live in the neighborhood. I’ll never understand why our parents kept this house out of all their other rental properties when they retired.”

Petunia winced when Vernon flushed in fury, but she knew he wouldn’t act against her sister. Assaulting an online Guide could get a mundane thrown in prison. She looked up and found Iris focused on her.

“He saw into your heart—and found you lacked the decency to raise a magical child with love,” Iris said flatly. “So Dumbledore left Lily’s precious baby with you with the knowledge that he would grow up unloved, unwanted, and probably outright neglected on a regular basis. Perhaps over time, the hatred you both feel for magic would’ve become so extreme that you’d have lashed out at Harry physically. There had to be other choices, other ways he could’ve protected Harry but I doubt they crossed his mind. He didn’t know about me—no one in Lily’s world did—but I doubt I’d have been his choice.”

Petunia agreed with that. Iris was four years older than Lily—a child from their father’s first marriage. She’d already been online as a Guide when Lily got her letter, and they all agreed that while Lily was welcome to explore the world of magic that Iris would not be discussed there. Sentinels and Guides weren’t unheard of in the magical world, but there were far more Sentinels then there were Guides, so Muggle Guides often found themselves pursued by magical Sentinels no matter their compatibility. Iris wanted no part of that. She wanted no part of a bond at all as far as Petunia knew.

“What do we do?” Petunia asked.

“Harry must live with a maternal blood relative in this house, and you can’t stand him. Obviously, you’re leaving, Petunia.” Iris rolled her eyes when Vernon started to bluster and turned to glare at him. “This is not your decision, Vernon. You get no bloody say!” She turned to Petunia. “I told you that settling for this twat would come back to haunt you, Pet. Imagine how he would eventually treat Harry. I know you can’t bring yourself to love him but do you honestly believe Lily’s son deserves go grow up in such an ugly situation?”

“No, you’re right,” Petunia said and took a deep breath. “Do you want to buy my half of the house?”

“I will, yes. I have enough money in my trust to cover half the value, and you can use that for a down payment on a house in a different area.” She raised an eyebrow when Petunia frowned. “Honestly, Pet, do you want your precious Dudders going to primary school with Harry?”

Iris turned on Vernon with a hiss, and her spirit animal appeared at her side. The leopard hissed at Vernon, too. “Do not ever say that about Harry again, Vernon Dursley.”

“You’re a freak, too,” Vernon blustered, and Petunia wondered where he’d gotten the courage to make such a statement.

“Get out of this house,” Iris said. “And you’re not welcome to return.”

“Vernon, please, just go pack a few things and stay at a hotel while we make arrangements to move,” Petunia said. “If you upset her unduly, you’ll be sanctioned by the S/G Center for Guide abuse which won’t hurt you now, but it could damage your career later.”

Vernon glared at Iris, stood and with a dirty look in Harry’s direction stalked out of the kitchen.

“He loves me,” Petunia explained. “You told me that—and what hope did I ever have for that? I’m not pretty like you and Lily.”

Iris sighed. “He does love you, and you’re lovely Pet.”

Petunia just shook her head. She appreciated her sister’s efforts, but she looked in the mirror every day—she was plain and ordinary. Iris and Lily were beautiful and extraordinary. That’s just the way things were.

Iris prodded one of Harry’s trucks aside as she crossed the living room to answer the door. “Harry! Come pick up your toys!”

Her son came trotting down the stairs even as she opened the door. Iris’ stomach lurched at the sight—a wizard. An elderly wizard. Her gaze narrowed as she allowed her empathy to bloom. Deception and dishonesty just seemed to pour off of him, and he hadn’t said a word. He was staring at her, wide-eyed with shock.

Iris leaned on the doorway. “Are you really? You dump a baby on the doorstep in the middle of bloody winter without even ringing the doorbell, and you’ve just now come around to check on him? Odd.”

“No,” Iris said and smiled when he reared back in shock. “And I know you can’t ignore that—the wards my sister set are quite intelligent.”

“I must speak with Petunia.”

“She can’t, she can’t move to Australia. The wards are tied to her and Harry—they’ll fall apart without her.”

Iris stared for a moment, surprised by how easy it was to tell he was lying. “I see, and how long could she be gone before this happened?”

“At the most, nine months,” Dumbledore said gravely. “You must contact her immediately and make her return.”

He looked down, and Iris sighed. Harry pressed against her side and stared at the old wizard. She put her hand on Harry’s shoulder to keep him from speaking. He relaxed against her and offered Dumbledore a shy smile.

“I see and can you tell me the state of the wards at this very moment?”

“They’re quite robust, but that will change quickly. Petunia must be here to raise Harry.”

“My sister moved to Australia in 1981,” Iris said flatly and glared at the old man as he sputtered. “Her husband was offered a very good opportunity for advancement that was too good to pass up. We talk occasionally, but she hasn’t been in this house in three and a half years.”

“But…” Dumbledore trailed off.

“Mum, is this Santa? He’s early! I haven’t finished cleaning my room!”

Iris snorted because Dumbledore was gaping at Harry. “No, love, this is not Santa. Do you remember how I told you that your first mum was a witch?”

“I’m a wizard,” Dumbledore corrected as if he were offended.

Harry frowned at him. “Is there something wrong with being a witch?”

“No, of course not.” Dumbledore straightened his robe.

“Then why are you mad to be called one on accident?” Harry questioned.

“By accident,” Iris corrected and patted his shoulder. “Go pick up your toys, sweetie, or we won’t have time to make biscuits before bed.” Harry darted away, and she focused on Dumbledore. “The wards are fine, Harry’s more than fine and doing very well in school. He’s had one bout of accidental magic but it was just some broken glass, and I was the only witness. You’re not wanted here, Dumbledore, so go away.”

He started to move forward, but the wards shimmered across the door and flashed a dull pink with warning. “How are you doing that? You’re a Muggle.”

“Well, not all Muggles are cut from the same cloth,” Iris said. “Go away and when his Hogwarts letter comes—Minerva McGonagall will be welcome to come talk to Harry about the school. He’ll make a decision about attending then.”

“He must attend a magical school, but there are hundreds of those all over the world,” Iris said. “Harry is an avid learner, and even now he is demanding student—far more than even his mother. So I expect he’ll pick a school with a variety of classes that will offer him a challenge. Lily admitted to me once that she would’ve gotten a better education at the International Academy. I may be a Muggle, but I have resources in the magical world.” She started to close the door but then swung it back open. “Also, to save yourself some embarrassment—you should return every single thing you’ve removed from the Potter vault. I’ve asserted my authority over it on Harry’s birthday during the summer, and the dverger will audit it after the New Year. You wouldn’t want to be accused of defrauding the House of Potter, would you?” She shut the door.

“You’re a Muggle,” Dumbledore snapped through the door.

“And you’re a bloody arsehole in an ugly dress!” Iris snapped. “Fuck off!”

Iris turned to stare at him. “Don’t repeat any of what I just said.”

Harry grinned. “Not even the ugly dress part?”

Iris sighed as he darted off with a laugh. She leaned against the door and the wards brushed over her mind. “Oh, Lily, you were so talented.” The air around her warmed and affection drifted over her mind. “I’ll keep your baby safe, I swear it.”

The Big Short is a short-form writing challenge hosted on Rough Trade’s forum, The Workshop. The prompts come in two forms — a word challenge (the theme) and a single character challenge. I post my responses to the prompts on the forum first and eventually they’ll make it to my website. Each is a stand alone piece with no potential for expansion.

These short works are NOT prompts! These are my responses to the forum prompts. No, you cannot use them as prompts. No you cannot continue my short work with a longer work or write a sequel. For fuck’s sake.